The effect of culture on the average expression of desirable traits in a population can be modeled as the negative change of the distribution’s skewness over time.

Taking height as an example of a desirable trait, it is very unlikely that the genetic mean for 100% Anglo-Saxon Americans has changed much in the last century. However, we have seen a remarkable change in the distribution of nutrition in this racial population. Where before, the height distribution had a positive skew due to malnutrition (the left-hand curve), the distribution has now approached the expected bell curve for random genetic variation. 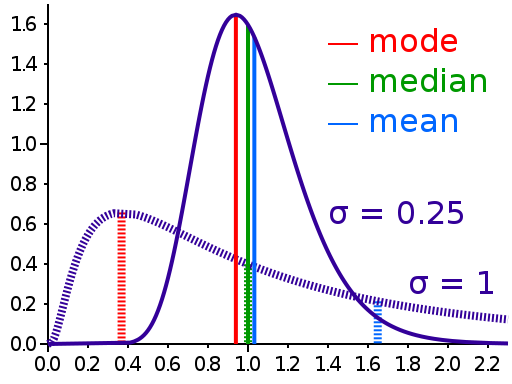 Because the skewness γ became less positive over time, – d/dt γ is positive.

Height and IQ are good singular examples because there are many genes involved, so that their variation approaches the normal distribution. But note that the definition says “traits” as in plural.

A “desirable” trait may be defined in the economic sense, particularly those factors contributing to SSMV (r-selection) and prosperity (k-selection). It follows immediately from the definition that a “bad” culture has a few extremely desirable people on the right tail (Alphas) and many undesirable people on the left tail (average frustrated chumps).

We can assume this to be the case if it is true that the genetic tendency of the population is strictly described by regression to the mean. Obviously this will not be the case if the genetic mean can change due to mutation, but the model is a good approximation as long as genetic changes are very slow with respect to the average lifetime (the period during which culture exerts influence). Again, this will obviously not be the case if genetic engineering becomes widespread.

2 Responses to Mathematical model of “good” culture vs. “bad” culture