In Stand Alone Complex, Lt. Col. Aramaki is a strict chief, and is informally referred to by Section 9 agents as the “old ape” … Even so, he is fiercely loyal to the members of Section 9, and often puts his own career on the line to ensure the survival of the rest of his team.

You don’t see Alphas done well in anime very often. Actually, I’m not sure I could come up with any others. But Aramaki’s character is done perfectly.

Alucard fights with ferocity and often-extreme cruelty, rarely shooting to kill until his target has been totally disabled and humiliated. However, he does seem to have some small shred of humanity left in him, as he is still capable of shedding tears, taken by Alexander Anderson to mean that he is not completely lost. As he is essentially immortal and invincible, Alucard is very egotistical as well. He freely taunts and belittles his opponents, often allowing them to inflict seemingly fatal wounds before healing himself and obliterating his enemy.

In conjunction, Alucard also holds a great affinity for humans who take pride in themselves, often expressing his desire to die by a human/mortal. He often shows respect for certain humans for their bravery, such as the mortal Iscariot members who fought to let Anderson reach him. Alucard has expressed extreme disgust with the vampires he has been hunting for the last 100 years, especially when they kill without purpose.

This one is tougher to justify than the others, but I’ll give it a quick try. Betas aren’t “in it to win it”, they play to have fun. They have perhaps the most realistic outlook on life of all the types and make no bones about what constitutes “fun” (sex, violence, etc.). So they also understand the need for restraint because they have consciences and long time horizons. To those ends, they allow themselves to be led by Alphas, systems, and ideals that they can believe in, because leadership and self-restraint are no fun.

Growing up with strong morals, Jet, reaching maturity, enlists in the Inter-Solar System Police (ISSP) and soon becomes an investigator. Due to the stubbornness he shows when he chases after criminals, he is nicknamed the Black Dog: the dog that bites its prey and never lets it go.

Despite the harshness of his work, Jet carries on a relationship with a woman named Alisa, whose proximity gives him the strength to keep going. After returning home one evening, he does not find Alisa in her place, he just finds a note from her that says “goodbye” and a pocket watch. Jet, torn by grief, questions at length the reason for the abandonment and promises that if the clock stopped before Alisa returned he would leave Ganymede forever.

You don’t see a lot of Deltas in anime either.

Vash displays two different personalities. Vash usually exaggerates foolish characteristics to make people feel unthreatened and to hide his identity. … He frequently voices the catchphrase, “This world is made of love and peace,” which is usually complemented by his flashing of the Peace sign. Many of Vash’s seemingly foolish and blind actions are often in reality attempts to surreptitiously encourage or discourage the behavior and decisions of people around him, leading him to constantly feign ignorance for events he was directly involved in. His pacifism and altruism seemingly have no limits, causing him to go so far as to make sure even criminals and despots survive potentially fatal incidents.

Hey, I love Vash too, but let’s be reasonable here.

Director Hideaki Anno described the hero, Shinji Ikari, as a boy who “shrinks from human contact”, and has “convinced himself that he is a completely unnecessary person, so much so that he cannot even commit suicide.” He describes Shinji…as “extremely afraid of being hurt” and “unsuitable — lacking the positive attitude — for what people call heroes of an adventure.”[1] When compared to the stereotypical hero, Shinji is characterized more by lack of energy and emotion than by any sort of heroism or bravery.[2]

Shinji’s relationship with his Evangelion and status as a pilot is very ambivalent; the entire series can be seen as a bildungsroman revolving around Shinji.[3]

Nobody likes Shinji. I’m an Omega, Evangelion is my favorite show, and I still hate Shinji. Bro, do you even lift? But he is absolutely necessary to the show, so whaddya do.

In the four years he travels around with various mercenary groups, it is shown that Guts had not grown close to anybody until meeting Griffith and the Band of the Hawk. Outwardly displaying a lonely, though arrogant teenage persona, Guts grows close to the Hawks throughout his three years with them, even disregarding Corkus’ negativity in greater light of his conflicts with Casca and adapting to the rough mercenary persona shared by the Hawks. Only after talking to Gaston moments before the Eclipse does Guts realize that the Hawks were a family to him and that he was too stubborn to admit it. The Eclipse’s occurrence causes the Hawks to be sacrificed, and Guts, upon waking up after four days of rest, ran outside Godo’s elven mine and cried upon remembering the Hawks’ deaths. Guts later accepts his loneliness after realizing the demonic nature of the enemies he will face. When he realizes that his actions were indirectly the cause for the Hawks’ deaths, he admits that he had no right to avenge them and focuses on finding a cure for Casca’s mental instability. Later, Isidro, Farnese, and Serpico resolve to join him, and Guts admits that he never knew that he would have comrades again seeing this as a new light in his life.

Guts is an Omega before the Eclipse (his position in the Hawks is nominal recognition for his abilities), then a Sigma afterward.

Edit: I forgot to do Lambdas. 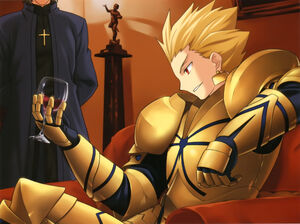 This is the best I could come up with. He’s basically superhero Milo without the humility. Even looks like him.

14 Responses to SSMV archetypes in anime