Why do dreams get most interesting as wakefulness approaches?

Open question. It seems that this is the period of the dream during which we experience the most effortless association and the greatest feats of aesthetic representation of abstract ideas (if they occur). Last night’s dream can serve as an example.

I was staying at the house of my (long deceased) grandfather on my dad’s side. Mostly normal dream stuff happened (nothing weird just normal horseplay with buds). At twilight, we went into the back yard to shoot off some fireworks (this got kinda mixed up in the dream, I think we started off with some skeet shooting). One harmless sort of sparkler fell on the next-door kid’s wooden playset. The kid had been watching the fireworks, and when he saw this he freaked out and started trying desperately to stamp it out. I tried persuading him that he was just going to get hurt and that his playset wasn’t in any real danger of catching fire but this just made him more desperate.

Probably all that was meaningless, but if I were pressed I’d interpret it as the frenetic reaction of conservative and moderate pundits to dank memes :-).

Anyway, the interesting part came at the end when I met a cyclops.

Two neighbors came over to talk to my grandfather all friendly-like. The first looked kind of like Steve Sailer and the other one looked like my caricature: 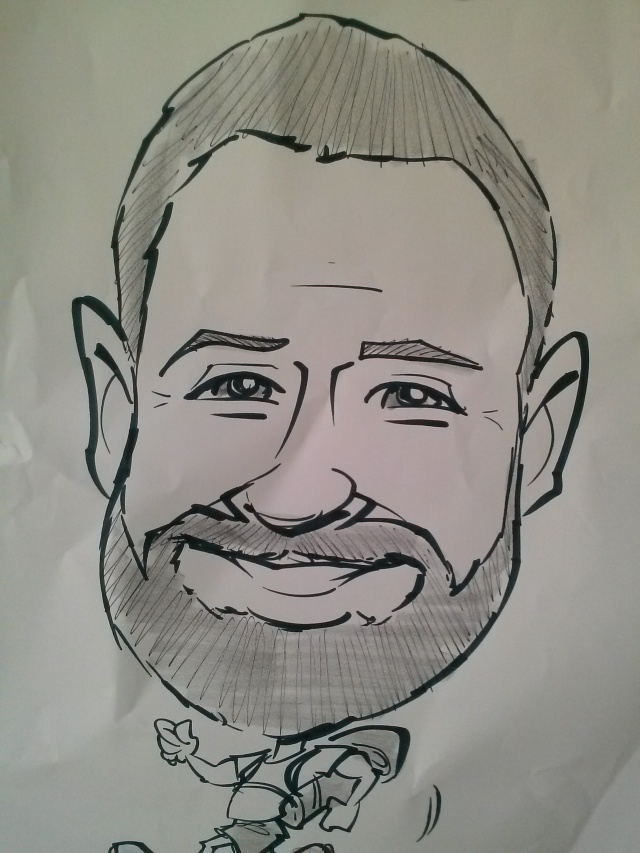 But there were two major differences in appearance: he had a very heavyset build like a pipefitter who also lifts weights (it put me in mind of ESR’s thick wrists), and his eyes were crossed and so close together that they were almost touching. In fact, when I looked closer it turned out that his two eyes were actually just one big eye with a small piece of skin stretched across the middle to split it in half. He noticed that I was staring and opened his eye as wide as it would go, and this caused the piece of skin to somehow retract into his brow like it was under tension, revealing the one big eye.

We had a short staring contest and the cyclops seemed surprised that I was meeting his gaze (which wasn’t hard at all), after which he turned and shambled away with the other neighbor. That was the end of the dream.

I believe these two characters represent the remaining two class archetypes in the overwatch theory- melonhead aristocrats (policy-writing game theorists and animal breeding enthusiasts) and artistic neanderthal geniuses (who shape culture for the neurotic class)- which I’d been thinking about yesterday in preparation for writing up their descriptions. There’s probably a great deal more to the deep state organization, but these two will be the end of what I’m comfortable jabbering about right now. Anyway, my magic brain’s connection between thals and the cyclops myths is very interesting if you look at it from the right angle.

This last bit probably isn’t important, but I’ll include it for dream connoisseurs: there was some weird confusion about in which US state this was all happening. When I saw the ESR cyclops, my first thought was “wait, you’re supposed to be in Michigan (for Penguicon) but this is Ohio”. The odd thing is that my grandpa’s old house is in southern Indiana on the Kentucky border. The name “Alabama” also came up in a completely unrelated context.

If Vejiortan’s conjecture is correct that I’m having accidental out-of-body experiences, then I will take a page from Freud and suggest that leaving the house is a semi-consistent metaphor for leaving the body.

21 Responses to Why do dreams get most interesting as wakefulness approaches?