Please be aware, there are two versions of this show—Fullmetal Alchemist and Fullmetal Alchemist: Brotherhood. The former was better, IMO, but it was created while the comic was still being written and diverges from the original artist’s plot. Put on your autiste hats, this is going to be competitive at the Olympic level.

Fullmetal Alchemist is about central banking and fiat currency. If I were smart, I could have figured this out years ago from the “alchemist” part of the title and the setting in steampunk magical Germany, but alas. The key moment in the show, which finally opened my eyes, was when the Elric brothers attack the original Homunculus, and he simply turns off their ability to perform alchemy. Basically, he froze the technocrats’ accounts. 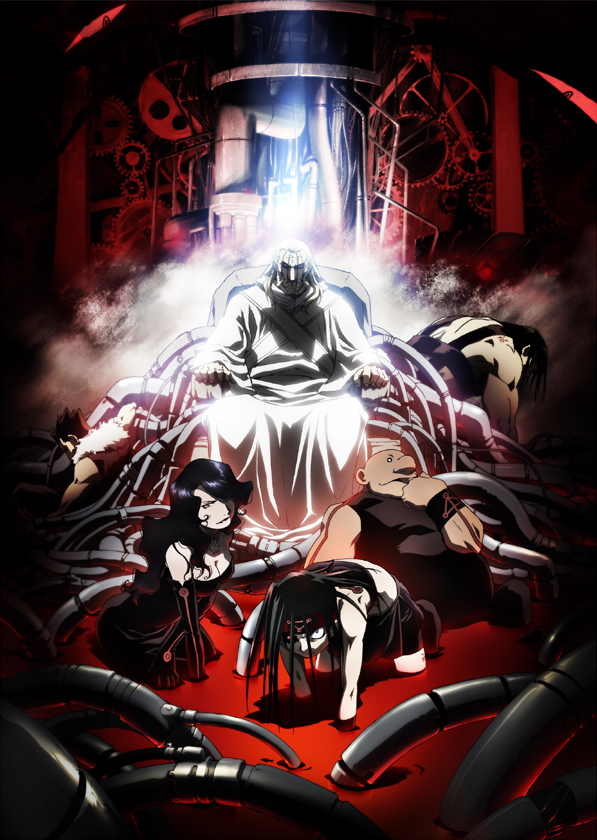 (The imagery here is absolutely perfect.)

The state alchemists are interchangeable with the class of people I refer to as technocrats in my overwatch theory of the primordial world-spanning pyramid society. These are people who believe the system works, if imperfectly, and spend their careers enforcing the rules of the state on its various silverback demagogues. They believe they are a society of geniuses due to their mental quickness and technical abilities but they lack a fundamental understanding of their roles and the nature of their knowledge. I believe this attitude primarily serves the adaptive purpose of allowing them to simulate psychopathy toward the lower castes, whom they nominally serve. The technocrat’s justification for his actions is thinly veiled victim-blaming: “If they were smart, they would have avoided it.” I.e. If they didn’t deserve to punished (for being mud people), they wouldn’t have been punished.

Thus, the technocrat’s conscience is always in a precarious position, and if the state takes ruthless actions that overwhelm his ability to rationalize them he may become disaffected. This is always a danger in pyramid societies.

The A-plot following Edward Elric is concerned with the nature of “alchemy” itself. To understand this, we have to know that alchemy is a metaphor for money in both the show and in real life. Hence the plot mechanic of “equivalent exchange”, referring to the economic concept of fair exchange. The exoteric pursuit of alchemists in real life was to turn lead into gold, and the esoteric pursuit was the prisca sapienta, roughly speaking a philosophy of mind in which something could spring from nothing. This gives rise to the legend of the “philosopher’s stone”.

In the show, the philosopher’s stone is a metaphor for the creation of a fiat money supply, which enables it’s wielder to use unlimited alchemic power and break the law of equivalent exchange. This refers to the ability of central bankers to inflate the fiat currency and spend it with full purchasing power (before it becomes diluted). There are three big reveals in this plot: 1) philosopher’s stones wear out after being used, and 2) new philosopher’s stones are created by killing large numbers of people, and 3) the Amestrian (Faustian) regime is structured to create these stones regularly by instigating wars, uprisings, and general mayhem.

With this information, you can decode the rest of the show with a bit of reflection (try reading through the wiki for inspiration). But I should mention that there are a couple of castes pictured in this show that I haven’t yet described in my theory because I’m still working out the details. They are represented by the homunculi (shapeshifting Babylonian sociopaths, a caste mostly composed of soulless snake melons) and the perpetual conflict between Hohenheim of Light (the magicians of the right-hand path: Fascists, Templars, Gnostics, and Freemasons) and the original Homunculus (magicians of the left-hand path: Communists, Jesuits, Luciferians, and Globalists). This backstory follows the Faustian myth pretty closely.

20 Responses to On Fullmetal Alchemist