The previous disclaimer still applies. I don’t recommend the show in general.

Evangelion is allegorical in nature, and the symbols are straightforward. When I hand you this cipher, you will be able to understand the allegory by doing a straightforward find/replace in a good plot summary*. For example, you can find/replace Lucifer for “Adam” and angel for “Evangelion”. (To understand the latter, it’s helpful to know that the words “angel” and “evangelist” mean messenger, as in messengers from God).

Adam…is the designation of the First Angel, the first of Earth’s two Seeds of Life and the progenitor of the Third through Seventeenth Angels. Adam is also the genetic basis of the Evangelions (with the possible exception of Eva-01).

Adam’s distinct physical features are never clearly shown, since in the few available glimpses of Adam’s adult form, it is either partially covered by ice or just a glowing silhouette—hence the nickname “Giant of Light.” It is a giant humanoid, similar in many ways to the Evangelions, but its true nature is unknown.

The macro-scale story is very tightly written in allegorical terms, because every major plot element has a 1-1 correspondence with something in occultism. However, the plot is still somewhat difficult to understand because the storytelling is fragmented and generally poor.

Our first clue that something is amiss is given by the fact that mankind is fighting for survival against “angels”. This immediately raises the question “aren’t angels supposed to be the good guys?” Following this clue to its logical conclusion leads us to the crux of the plot: The Human Instrumentality Project.

The SEELE cabal’s logo is the same symbol as found on Lilith’s (Babalon’s) mask.

The SEELE cabal’s ultimate goal is to reduce humanity to a fluid of undifferentiated stem cells (LCL), creating a chaotic god-like superorganism superior to Adam and the angels. This assimilation would simultaneously mean the end of all human anxiety, war, competition, and strife. This will sound familiar to some of you as the transhumanist goal of Gnosticism/Kabbalah:

The goal (of Soros, since I assume that is what you are asking) is to create a global government where all people intermingle and breed and become one people ruled by a radically pure Jewish race. They sincerely believe under their rule all human conflict will cease because there will be no more cause for division. This desire is born out of a fear of the horrors of WWII. The Holocaust is a lie, but the death toll was still massive nonetheless. And many people were brutalized by it.

The easiest way to understand this is to think of it as mirrored Nazism: Soros and Hitler only disagree on which radically pure bloodline ought to be in charge of ruling the degenerate masses of humanity, and which would have to be exterminated as unwanted competition.

So this occult business is what the show is really all about. Now we can explain the initial paradox of humans fighting angels: the angels are sent by “God” to halt this modern Tower of Babel project.

On the one hand you have Adam (Lucifer) and the angels attempting to punish humanity’s (the Lilins’) hubris by causing a mass extinction event (called the Third Impact*) and on the other hand you have Lilith (Babylon) and SEELE fighting back with all of earth’s military might and NERV’s captured angels (EVAs) as they attempt to direct the same extinction event to achieve their Instrumentality Project. These extinction events (first, second and third impacts) occur whenever the genetic material of Adam and Lilith are mixed, which recalls the magical idea that sex, death, and rebirth are inseparable.

Human Instrumentality is (mostly) achieved in The End of Evangelion, when Lilith wins this struggle and breaks down the AT Fields of (almost) all of humanity by presenting them with the prospect of joining minds with the people they love. When their resistance is broken down, they lose individuality and revert to primordial LCL.

At first Maya’s attraction to Ritsuko only appears to be a professional admiration, enhanced by Maya frequently being seen working aside Ritsuko, and Maya always referring to the other woman as “Ritsuko-sempai” or merely “Sempai”, an honorific directed towards a person of higher rank. However, Maya’s transition guide in Episode 26′ takes the form of Ritsuko Akagi, who types “I need you” (literally: “INEEDYUO”) on Maya’s laptop with her hands over Maya’s, and then embraces her. Before turning to LCL Maya cried “Sempai! Sempai! Sempai!” with a look of ecstasy, tears flowing from her eyes. This suggests that Maya was secretly in love with Ritsuko, though whether Ritsuko knew about this attraction or reacted to it is uncertain.

AT Fields refer to a person’s self-concept, and the integrity of their feelings of individuality. The best term to describe this is self-perception, or simply consciousness. The purpose of the Human Instrumentality Project is to break down all these individual human AT Fields so that humanity becomes an undifferentiated mass with no fears, anxieties, or self-consciousness. 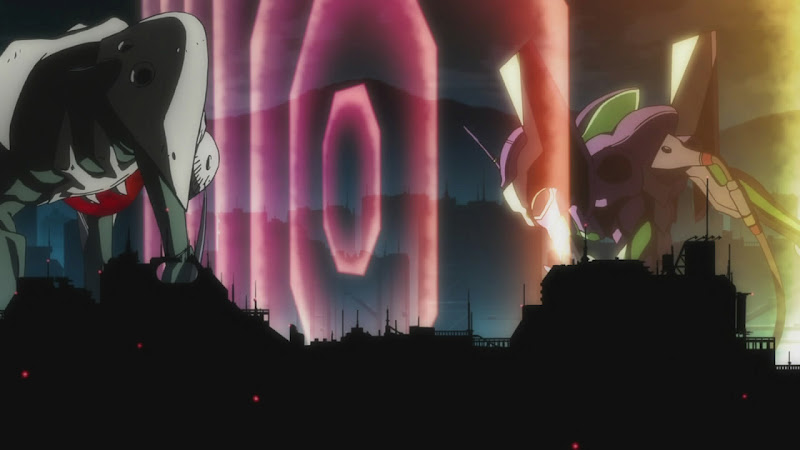 An angel defensively projects its AT (absolute terror) Field to protect itself.

Despite my reservations about the quality of the show, there are many examples of pure genius to be found. LCL is one of these, because reducing humanity to primordial ooze is a compelling visual and, furthermore, the logical extreme of Soros’ plan to reduce all the earth to miscegenating mud slaves constantly humping each other whenever the whip hands aren’t looking. And on top of that, I’d wager that if we want to talk about the mysteries of DNA, evolution, and intelligent design, we’d get the best returns by examining them at the abstraction level of cell differentiation processes.

There is also some insightful commentary on this occult dialectic. First and foremost, we see that the synthesis “as above, so below” is well-represented in the architecture of NERV headquarters and Tokyo-3 and in the plot surrounding NERV.

Though the war between the right-hand path of Adam and Gendo Ikari and the left-hand path of Lilith and SEELE is hard-fought, vicious and often extremely brutal, the average ignorant civilians are gonna get fucked in the ass no matter who wins. Japanese fatalism is 100% on full display in this series.

Another bit of insightful commentary is found in the fascist world surrounding NERV. This high-trust, cohesive society is the beautiful dream that inspires the 1488ers:

You can’t argue with the beauty of human harmony when society is united in striving toward a singular pursuit. The problem with that…is that human harmony can only be achieved when cooperation is more adaptive than competition. And for that, you need an existential threat. This means that fascism requires an eternally escalating war against an alien threat. We catch a glimpse of this beautiful dream as every resource in the worldwide society of Evangelion is mustered under the direction of SEELE to fight the angels. Even Shinji’s schoolmates are revealed to secretly be a selected pool of reserve EVA pilot candidates. Fascistic aestheticism is brilliantly displayed throughout.

But we also see the consequences of complacency and ignorance for those who spend their lives dreaming.

Lilith collecting souls across the Earth during Third Impact

There’s a great deal more unpacking to be done and I might get around to doing that, but if I don’t you can consider this post to be a Rosetta Stone for interpreting the rest of the series.