Reading flags and corporate logos is really fun for me now that I have the basic language down. Previous installments on this topic: 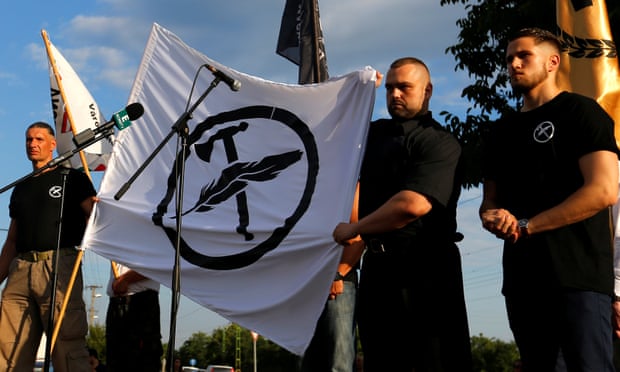 The design recalls the sickle and hammer, indicating they want national socialism. Quills refer to scholarship and tomahawks are for war, indicating the values they’ll use to make policy and economic decisions. So basically, they want to be an aristocracy of warrior poets, financed by expansion and conquest of lesser peoples. The black and white refers to absolutism rather than relativism. The circle refers to holism, universalism, completeness, etc. If they take power and their economy takes off they’ll probably try to conquer Europe and then Jerusalem.

There’s nothing implicit in the salute itself. That’s a very common method of saluting when you’re holding a flag like that. You’ll see that in the American military as well (the dude in the shades is doing it wrong).

The flag itself is a black upward arrow surrounded by a crown of laurels on a gold field. Again, “muh filosofy kangz”, although a bit more traditional. The gold field is a garish pronouncement of the prosperous utopia they intend to build, and the crown of laurels recalls the Greco-Roman tradition for celebrating military victories. The arrow probably refers to Tiwaz (and the Luciferian ethos in a nutshell), because alt-white hates Christ.

I’d warn these guys that having an underclass is far worse idea than cutting your own grass, but they wouldn’t listen. “How would the kangz have time to filosofize?” There’s a reason we Americans caution specifically about resting on one’s laurels.