In order to figure out where you need to start, you need to know where you are. The first step in fixing your problems, in a broad sense, is to identify them as first-world, second-world, or third-world problems.

I used to work with a homeless guy. He was a really nice, hardworking guy who was pleasant to be around, but he was bankrupted by divorce and incapable of accumulating money. The alimony collectors would visit him in the shelter regularly and demand everything he had, threatening debtor’s prison if he refused. He carried a ball-peen hammer in his sleeve because living on the streets near Somalitown in Minneapolis is extremely dangerous. He had third-world problems, related primarily to physiological needs (obtaining basic nutrition, water, and shelter) and secondarily to safety and security from criminals and state predation. If I’d suggested he needed to get an apprenticeship in a marketable skill, he would have just laughed at me and would be right to do so. Building a marketable skill is a second-world problem—he wasn’t suffering from hopelessness so much as desperately fighting off malnutrition. 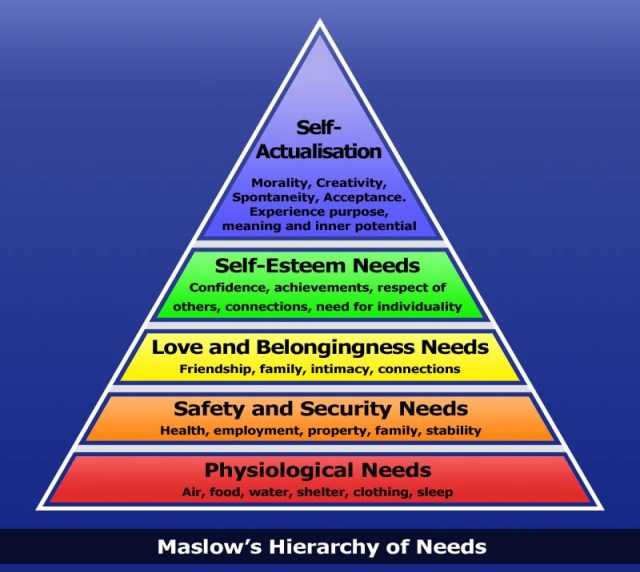 Second-world problems are concerned with the middle of the pyramid. (These are the kind I’m most familiar with and can advise you on.) The most common case these days has you living in your mom’s basement with no social network, no understanding of the outside world, no marketable skills, and a load of student loan debt. Probably getting a job is financially counterproductive because it removes the forebearance on your loan payments, which are higher than you can make at a minimum-wage job, and getting a proper trade education is out of the question because your credit is too poor and you’re too white to receive grant money. If your problems are causing you hopelessness and ostracism then you have second-world problems, concerned primarily with a lack of any tribal, social, or ethnic support network. You may also be concerned with some safety and security issues (e.g. I’ve had to avoid some risks for lack of access to healthcare), and you might feel the sting of low self-esteem, but you probably have access to enough complex carbohydrates to know you’ll be alive next week. This is a surprisingly large problem in white America because, as genetic mutts with no tribe and a tendency to the gnostic fallacy, we “throw the children’s food to the dogs” with a cynicism that would shock Europeans. (See also: the Alt-White phenomenon, MGTOW, NEETs.)

First-world problems are concerned primarily with self-actualization and self-esteem issues. I don’t have any advice for these, but they from the outside they appear to stem from delusional worldviews (liberalism, cosmopolitanism, secularism), ennui, and selfishness. Personally, my focus in salvaging the next couple of generations will be on second-world problems because that’s what I know, and that’s where I think the sweet spot is for an effective salvage attempt. As far as that goes, I expect the effectiveness will follow a Pareto distribution where 20% of young white men can be salvaged with a reasonable expenditure of effort, money, and time. Those 20% (hopefully) only need replacement families/social networks where IRL communities were supposed to be, after which they will have the right stuff to enter the lower-middle class, at least. (Yes, I know “success” means upper-middle class in America but in the context of NEETs I’m defining success as lower-middle class with an LTR and a baby.)

19 Responses to The first step