Bice reminded me of one of my old pet peeves, which is that succor for invaders is not altruism. This is a particularly timely sort of deception because all of the globalists are suddenly discovering deeply held Christian values they can appeal to in favor of granting amnesty to every POS the world over. 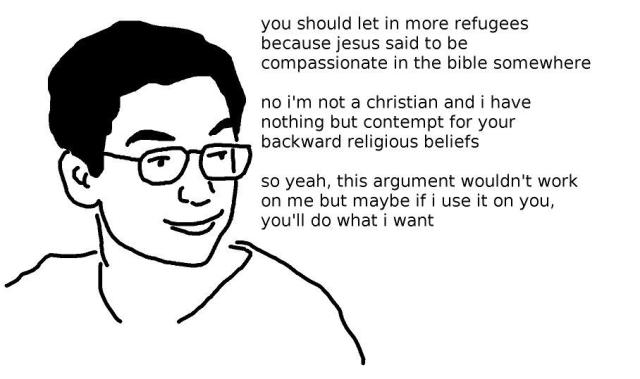 Since today is apparently Bible story day, I thought I’d give you a nice reference point for liberal “compassion”.

Rahab and the Spies
2 Then Joshua son of Nun secretly sent two spies from Shittim. “Go, look over the land,” he said, “especially Jericho.” So they went and entered the house of a prostitute named Rahab and stayed there.

4 But the woman had taken the two men and hidden them. She said, “Yes, the men came to me, but I did not know where they had come from. 5 At dusk, when it was time to close the city gate, they left. I don’t know which way they went. Go after them quickly. You may catch up with them.” 6 (But she had taken them up to the roof and hidden them under the stalks of flax she had laid out on the roof.) 7 So the men set out in pursuit of the spies on the road that leads to the fords of the Jordan, and as soon as the pursuers had gone out, the gate was shut.

8 Before the spies lay down for the night, she went up on the roof 9 and said to them, “I know that the Lord has given you this land and that a great fear of you has fallen on us, so that all who live in this country are melting in fear because of you. 10 We have heard how the Lord dried up the water of the Red Sea[a] for you when you came out of Egypt, and what you did to Sihon and Og, the two kings of the Amorites east of the Jordan, whom you completely destroyed.[b] 11 When we heard of it, our hearts melted in fear and everyone’s courage failed because of you, for the Lord your God is God in heaven above and on the earth below.

Anybody remember how this story ends? I know we’re no longer a literate nation but I’m hoping some of you have at least seen Veggie Tales.

20 When the trumpets sounded, the army shouted, and at the sound of the trumpet, when the men gave a loud shout, the wall collapsed; so everyone charged straight in, and they took the city. 21 They devoted the city to the Lord and destroyed with the sword every living thing in it—men and women, young and old, cattle, sheep and donkeys.

22 Joshua said to the two men who had spied out the land, “Go into the prostitute’s house and bring her out and all who belong to her, in accordance with your oath to her.” 23 So the young men who had done the spying went in and brought out Rahab, her father and mother, her brothers and sisters and all who belonged to her. They brought out her entire family and put them in a place outside the camp of Israel.

24 Then they burned the whole city and everything in it, but they put the silver and gold and the articles of bronze and iron into the treasury of the Lord’s house. 25 But Joshua spared Rahab the prostitute, with her family and all who belonged to her, because she hid the men Joshua had sent as spies to Jericho—and she lives among the Israelites to this day.

This idea that “pathological altruism” is to blame for our immigration woes pisses me off to no end because it’s the polar opposite of the truth. What we’re talking about is treason, and treason is by definition the most selfish, anti-altruistic thing there is. But nooooo, some Jew goes and calls their subversion engine a “charity” and all these fucktards take it literally and decide Jesus hates the weak now. Because consensus is God to these sapes (not even once). This reaction is the exact fucking reason these Christian-hating faggots engineered this thing. How many centuries in a row does the right have to lose every battle before it takes Sun Tzu’s words to heart? Know yourself, know your enemy, deceive your enemy, WIN.

You know, we wouldn’t even have this problem if you all patrolled your thots. Just say no to degeneracy kids, women will run from you but they’ll be back in time for dinner, even if they pretend they don’t remember the screaming hissy fit. That is, assuming you can trust the men around you to say no as well…