Veganism is a genocidal ideology, because of:

“We at PETA very much love the animal companions who share our homes, but we believe that it would have been in the animals’ best interests if the institution of “pet keeping”—i.e., breeding animals to be kept and regarded as “pets”—never existed.” PETA, Vegan Organization

“‘The object of the Society shall be to end the exploitation of animals by man”; and ‘The word veganism shall mean the doctrine that man should live without exploiting animals.”

The Society pledges itself ‘in pursuance of its object” to ‘seek to end the use of animals by man for food, commodities, work, hunting, vivisection and all other uses involving exploitation of animal life by man.” The Vegan Society, OG Vegans

EXACTLY WHAT IS SAYS ON THE TIN

What? Whaaat? Vegans? You’re telling me vegans are genocidal maniacs? But I thought they were holier than thou pacifists?

You heard right, hypothetical man. The end game of veganism is anti-human genocidal eradication in the name of reducing suffering in the world.

This is a strong claim, and I would not expect you to believe it without some strong evidence to support it. This will be provided.

Have you ever met a vegan? They are religiously devoted to decreasing suffering for those beautiful animals that are really, when you think about it, more pure than these evil humans. If you talk to a vegan, you will hear stories of the cruelty to animals that humans can dish out, the horrors of factory farming, and the terrible suffering of the innocent animals that… ugh, HUMANS, are constantly killing for food.

In the veganosphere, everyone agrees that vegetarians are just shitty vegans. The TRUE apotheosis of veganism is a world with small tribes of feral humans, (or no humans at all!), free of enslaved animals, no domestication, no harvesting our fur brothers and sisters for skin and industrial products. Fuck industry, man! And fuck Man!

Why is this? It’s possible for reasonable people to agree that tying a dog to a post in the summer heat with no food is bad, without agreeing that domesticating animals was a mistake. Yet PETA operates the largest kill shelters in the US under the ideology that domestication is slavery, and having pets is an abomination. Because they are good vegans.

IF YOU NEVER EXISTED YOU CAN’T SUFFER

“We at PETA very much love the animal companions who share our homes, but we believe that it would have been in the animals’ best interests if the institution of “pet keeping”—i.e., breeding animals to be kept and regarded as “pets”—never existed.”

“This selfish desire to possess animals and receive love from them causes immeasurable suffering, which results from manipulating their breeding, selling or giving them away casually, and depriving them of the opportunity to engage in their natural behavior. They are restricted to human homes, where they must obey commands and can only eat, drink, and even urinate when humans allow them to.”

Hopefully that’s as unambiguous as possible. PETA is a logical result of the principle that animal suffering is equal to human suffering, that humans are exploitinganimals by extracting their love energy and taking them away from The Wild.

But PETA is kind of radical. Maybe all vegans don’t think that way?

THE VEGAN DEFINITION OF VEGANISM:

Donald Watson coined the term vegan in 1944 when he co-founded the Vegan Societyin England. At first he used it to mean “non-dairy vegetarian”, but from 1951 the Society defined it as “the doctrine that man should live without exploiting animals”

“‘The object of the Society shall be to end the exploitation of animals by man”; and ‘The word veganism shall mean the doctrine that man should live without exploiting animals…”

“…Where every other movement deals with a segment – and therefore deals directly with practices rather than with principles – veganism is itself a principle, from which certain practices logically flow.”

So you can see that veganism originated as that central principle. Vegans broke off from vegetarians from the start as a radical philosophy. PETA is just the original vegan talking points put into practice.

-“Meat Is Murder”, The Smiths, written by Morrissey, Vegan

Doesn’t that make the rest of us criminals?

Quick recap:
-Veganism, almost from the beginning, was a radical philosophy of ZERO animal exploitation by humans.
-The logical result of this “Animal Non-Aggression Principle” is that most human activity visits intolerable cruelty on animals, and must cease.
-Current Vegan activism today, in practice, results in systemic killings and human suffering

What would a vegan future look like? We can catch glimpses through how they treat ‘cruelty-conscious’ people in the present.

For example, a Vegan group harassed a ‘sustainably raised’ meat shop, eventually blackmailing them into putting a sign on the door saying that killing animals are unjust, no matter the method:

“Feet away from the butchers carving pork loins and beef shanks, the owners of a California meat shop have installed a peculiar sign in their window: “ATTENTION: Animals’ lives are their right. Killing them is violent and unjust, no matter how it’s done.”

The odd poster seeming to discourage customers from buying their meats is the result of a months-long dispute between the owners of the Local Butcher Shop – which sells “locally sourced, sustainably raised” meat – and animal rights activists who have staged more than a dozen loud and gruesome protests outside the family-owned business in Berkeley.”

“The group argues that there is no ethical way to kill animals for food and are campaigning to make Berkeley the first “city free of violence toward animals” – meaning banning the sale of meat.”

“I don’t understand why activists would pick on a mom-and-pop shop supporting the most humane farmers, rather than the animal factories and meatpackers responsible for brutality on an unimaginably greater scale,” said Michael Pollan, the well-known American food writer and a University of California, Berkeley professor, in an email. “Unless you believe the complete abolition of meat-eating is a realistic goal, attacking this sector of the animal economy … strikes me as misguided.”

In other words, if you sell meat, no matter how consciously or sustainably raised it is… These vegans want to conquer and destroy you.

The end goal of veganism, the change they want to see in the world, is a world where all animal products are banned, all pets and livestock are killed or released to die in the wild, and humans subsist on a mix of vegetables and vitamin enriched soy meal.

That is, unless your farm or housing development destroys wildlife habitat (and pretty much all of them do).

Again, most of this stuff is already happening, just limited by vegan acceptance. Take a look at this Vegan Samurai, Gary Yourofsky:

The Most Radical Vegan Activist Ever | https://vegansamurai.org/2016/02/25/the-most-radical-vegan-activist-ever/

“One very inspiring aspect of Gary’s work is that he doesn’t limit himself to just promoting veganism.

“In one video embedded in this article, he speaks of his wish that people who eat animals or engage in animal exploitation be treated as badly as animals are treated.

He sometimes gets very worked up and appears to wish violence upon those who participate in or support animal exploitation industries.”

The author of this profile basically says that while this guy is too extreme even for PETA, that’s exactly what makes him the Most Vegan Of Vegans:

“Sometimes I wince at the directness, fire, and in-your-face style he uses, but Gary Yourofsky has risked his life and freedom for innocent animals.

He truly embodies the qualities of a Vegan Samurai– he’s strong, unafraid, and willing to risk his safety and freedom to defend the defenseless.”

Take a look at Yourofsky’s main site, where he describes humanity as the filthiest parasites on the planet:

“Since humanity thrives on abuse, discrimination and injustice 24/7, I no longer believe veganism can reduce or eliminate the depraved things we do to each other…

…we are the nastiest, filthiest, deadliest parasitic-organisms to ever infect The Universe! Fortunately, vegan lifestyles weren’t created for us. They exist to reduce and eliminate the depraved things we do to animals and the environment. So the fight to end speciesism must continue!” 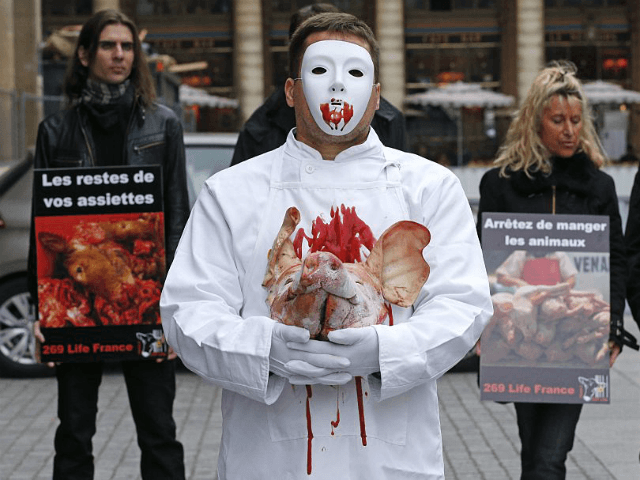 Yesterday’s Vegan Society is today’s PETA. Modern day Vegans are either more radical than PETA or wishing they could be as moral and consistent as the super radicals. Any success or concession has immediately been used to demand more concessions and more radical changes because THE END GOAL HAS NOT CHANGED. Veganism is and always was about eliminating humanity, because people cause animal suffering by existing.

And since White People are a subset of humanity, and because that makes them just one more segment of the population to wipe out or conquer…

-Effortpost by Boneflour, reprinted with permission from our Jewish overlords.