Same popular vote as ever, but polarization on a level that will cause sabermetricians to introduce new vocabulary to explain how quickly the variance in the distribution is increasing even as the center of mass moves very little. That is, roughly the same number of seats for everybody, but with red areas becoming much more red and blue areas becoming much more blue. In red strongholds we’ll get a few Chad Buchanans and in blue strongholds we’ll see openly communist/muslim/etc. extremists like Ocasio-Cortez win. So, using the spectrum from this excellent paper (H/T Koanic)… 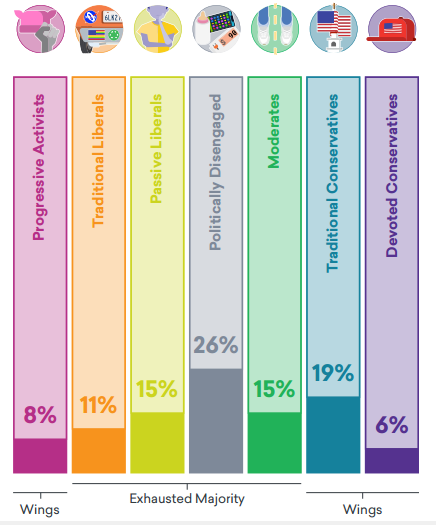 …this predicts our future will have more immigration restrictionism and more crackdowns on speech. It’s never fun for a naturally idealistic person to compromise but, pragmatically speaking, I’d make that trade in a heartbeat.

We’ll see the usual low turnout in the vast majority of races (contra the insulated technocrats who are expecting high turnout, voter enthusiasm, and a $COLOR wave), with unusually high turnout in a few key Trump referenda that will even out across the country. In statistical terms, think of a flatter distribution with much more variance and about the same center of mass. This will make for a hotbed of Frame Games because people will be able to find supporting evidence to believe whatever they want. In particular I expect the Alt-West will declare the Eternal Victory March of Truth and Light (due to living primarily in Republican strongholds) and work themselves up to their own little Cville where they learn why the NPC meme was “rediscovered” after lying dormant for years. As with the Alt-White’s fascism, this will cut straight to the core of their worldview and I’m curious to watch what they make of it.

So even as our external borders harden, the internal borders will be hardening faster and every side’s extremists will begin to learn the value of message discipline in 4GW.