This is good. There are a number of memes like this one where the Alt-Right is gaslighting itself and these people need the piss taken out of them until they unlearn the behavior. I’m thinking of the “no internal dialogue” meme, the switchface-as-primate-submission meme (which is particularly stupid), and the Generation Zyklon meme.

I’m honestly pretty fatigued of the NPC meme, but twitter isn’t, and people getting banned out here, and the lefties are triggered; that’s what happens when you think parroting late night talk show talking points makes you intellectually rebellious. truth is pain

There’s a sort of implicit claim that is fundamental to humanistic thought, which is fundamental to this era of western thought, it’s the idea that Gaussian variance aside, everyone has petty much the same experiential topology. Let’s call it human neurological uniformity (HNU)

Ignoring such people as autists for the moment, and given HNU, which most people believe perhaps without ever having thought about it, what do we expect to happen when everyone watches the same small pool of tv shows and news broadcasts?

Suppose you have agency, inner life, &c. And you decide, using the marvelous brightness in your soul, to watch 60 hours of game of thrones. Because you are normal, you now have thoughts about John snow and Daenerys, thoughts which you share with millions of others

Industrialization is a process of mass repetition and homogenization. Industrial man is highly repetitive and homogenized, and the mechanism that repeats and homogenizes is broadcast media. Before that it was books and pamphlets and newspapers

The nature of our inner life in broadcast media vs. written media is different. The idea of the NPC refers to a kind of total conformity of being that is brought about by broadcast media.

Tocqueville described the NPC meme in 1895 “What is still more strange is that all these men, who kept themselves so apart from each other, had become so much alike that it would have been impossible to distinguish them if their places had been changed.”

He was talking about the effects of reading books mass-produced by the printing press. Cobbett in 1795: Every farmer is more or less of a reader. There is […] no class like that which the French call peasantry…They have all been readers from their youth up

Ironically avid readers are probably less NPC-ish than “illiterate” TV-primary people. In a highly literate society, visual and behavioural conformity frees the individual for inner deviation. Not so in an oral society where inner verbalization is effective social action

You can log in to netflix and see a hundred different shows, but they’re all very similar in their underlying themes and worldviews. Even the older stuff is carefully curated to mesh with contemporary sensibilities, mostly. The same characters in different shows, the same dramas

The effect of watching so much TV is you form a series of unilateral friendships. It feels like you personally know all the people you are watching, and you move into social alignment with them, just like you would with a group of in-person friends

This fits the Kaczynskian take that leftists are “oversocialized”. h/t @BeigeShiba “A person could be so thoroughly conditioned with society’s avalues as to compromise their own agency to make choices as independent individuals. (1/4)

We find ourselves in a pervasive system of cradle to grave social conditioning, starting with childhood to early adulthood and then continually reinforced through authority figures in media, entertainment, and politics. (2/4)

The cumulative effect of all this can result in tragic individuals who can think and feel just as any of us can, yet are compelled to to comply with their social conditioning in order to avoid unbearable psychological suffering. (3/4)

This is very different to a community or subculture with its own distinct aphorisms and in-jokes. The oversocialized never choe to be the way they are, it was imposed upon them.”
(4/4)

TV, movies, and pundits (newscasts, podcasts, bluechecks) are the medium of oversocialization. If you dig back into early memories of childhood cartoons and sitcoms you can almost remember the way it happened. It’s not indoctrination exactly, since that implies a baseline.

We are all oversocialized and the act of waking up is the act of bearing and confronting the pain of pushing back against our social programming. You only do this if you have a powerful incentive to do so, i.e., you are already in a circumstance of tremendous psychological pain

The common pathway to right-wing shitlordery is through the PUA/Redpill/manosphere pipeline. Gamers are rendered sterile by their oversocialization and the soul-crushing pain of TFW no GF causes them to confront their social programming in all arenas of the mind

In the evolving meaning of the NPC meme, we are realizing that it is most effective as a way to instantaneously convey that a person is in the grip of Kaczynskian oversocialization. Even naming the evil spirit is enough to cause tremendous psychic distress, as we have seen.

If social programming privileges one group over another, it is safe to say that the disprivileged group will tend to be the one that is in the most pain, and therefore the most likely to break free of their programming. This should raise some uncomfortable questions for everyone

On the other hand, we need to keep in mind that this is still 100% true: 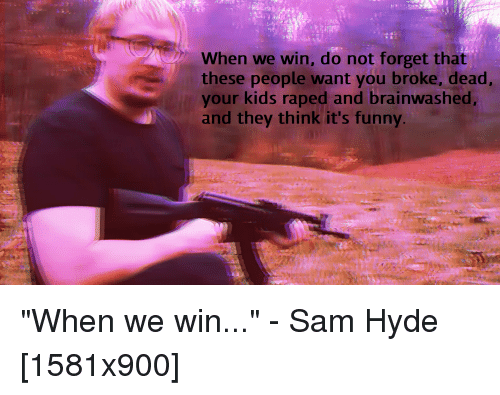 10 Responses to Zero HP Lovecraft on the NPC meme