On motivation (summary of “Drive”)

This is my favorite book on the subject of motivation, which is possibly the most important intellectual problem facing the West in the next fifty years. Here is a summary, taken from the final chapter of the book itself:

Introduction: The Puzzling Puzzles of Harry Harlow and Edward Deci Human beings have a biological drive that includes hunger, thirst, and sex. We also have another long-recognized drive: to respond to rewards and punishments in our environment. But in the middle of the twentieth century, a few scientists began discovering that humans also have a third drive—what some call “intrinsic motivation.” For several decades, behavioral scientists have been figuring out the dynamics and explaining the power of our third drive. Alas, business hasn’t caught up to this new understanding. If we want to strengthen our companies, elevate our lives, and improve the world, we need to close the gap between what science knows and what business does.

PART ONE. A NEW OPERATING SYSTEM

Chapter 1. The Rise and Fall of Motivation 2.0 Societies, like computers, have operating systems—a set of mostly invisible instructions and protocols on which everything runs. The first human operating system—call it Motivation 1.0—was all about survival. Its successor, Motivation 2.0, was built around external rewards and punishments. That worked fine for routine twentieth-century tasks. But in the twenty-first century, Motivation 2.0 is proving incompatible with how we organize what we do, how we think about what we do, and how we do what we do. We need an upgrade.

Chapter 2. Seven Reasons Carrots and Sticks (Often) Don’t Work . . . When carrots and sticks encounter our third drive, strange things begin to happen. Traditional “if-then” rewards can give us less of what we want: They can extinguish intrinsic motivation, diminish performance, crush creativity, and crowd out good behavior. They can also give us more of what we don’t want: They can encourage unethical behavior, create addictions, and foster short-term thinking. These are the bugs in our current operating system.

Chapter 2a. . . . and the Special Circumstances When They Do Carrots and sticks aren’t all bad. They can be effective for rule-based routine tasks—because there’s little intrinsic motivation to undermine and not much creativity to crush. And they can be more effective still if those giving such rewards offer a rationale for why the task is necessary, acknowledge that it’s boring, and allow people autonomy over how they complete it. For nonroutine conceptual tasks, rewards are more perilous—particularly those of the “if-then” variety. But “now that” rewards—noncontingent rewards given after a task is complete—can sometimes be okay for more creative, right-brain work, especially if they provide useful information about performance.

Chapter 3. Type I and Type X Motivation 2.0 depended on and fostered Type X behavior—behavior fueled more by extrinsic desires than intrinsic ones and concerned less with the inherent satisfaction of an activity and more with the external rewards to which an activity leads. Motivation 3.0, the upgrade that’s necessary for the smooth functioning of twenty-first-century business, depends on and fosters Type I behavior. Type I behavior concerns itself less with the external rewards an activity brings and more with the inherent satisfaction of the activity itself. For professional success and personal fulfillment, we need to move ourselves and our colleagues from Type X to Type I. The good news is that Type I’s are made, not born—and Type I behavior leads to stronger performance, greater health, and higher overall well-being.

Chapter 4. Autonomy Our “default setting” is to be autonomous and self-directed. Unfortunately, circumstances—including outdated notions of “management”—often conspire to change that default setting and turn us from Type I to Type X. To encourage Type I behavior, and the high performance it enables, the first requirement is autonomy. People need autonomy over task (what they do), time (when they do it), team (who they do it with), and technique (how they do it). Organizations that have found inventive, sometimes radical, ways to boost autonomy are outperforming their competitors.

Chapter 5. Mastery While Motivation 2.0 required compliance, Motivation 3.0 demands engagement. Only engagement can produce mastery—becoming better at something that matters. And the pursuit of mastery, an important but often dormant part of our third drive, has become essential to making one’s way in the economy. Indeed, making progress in one’s work turns out to be the single most motivating aspect of many jobs. Mastery begins with “flow”—optimal experiences when the challenges we face are exquisitely matched to our abilities. Smart workplaces therefore supplement day-to-day activities with “Goldilocks tasks”—not too hard and not too easy. But mastery also abides by three peculiar rules. Mastery is a mindset: It requires the capacity to see your abilities not as finite, but as infinitely improvable. Mastery is a pain: It demands effort, grit, and deliberate practice. And mastery is an asymptote: It’s impossible to fully realize, which makes it simultaneously frustrating and alluring.

Chapter 6. Purpose Humans, by their nature, seek purpose—to make a contribution and to be part of a cause greater and more enduring than themselves. But traditional businesses have long considered purpose ornamental—a perfectly nice accessory, so long as it didn’t get in the way of the important things. But that’s changing—thanks in part to the rising tide of aging baby boomers reckoning with their own mortality. In Motivation 3.0, purpose maximization is taking its place alongside profit maximization as an aspiration and a guiding principle. Within organizations, this new “purpose motive” is expressing itself in three ways: in goals that use profit to reach purpose; in words that emphasize more than self-interest; and in policies that allow people to pursue purpose on their own terms. This move to accompany profit maximization with purpose maximization has the potential to rejuvenate our businesses and remake our world.

This is a book I’d recommend reading in its entirety, if only to find gems like this: 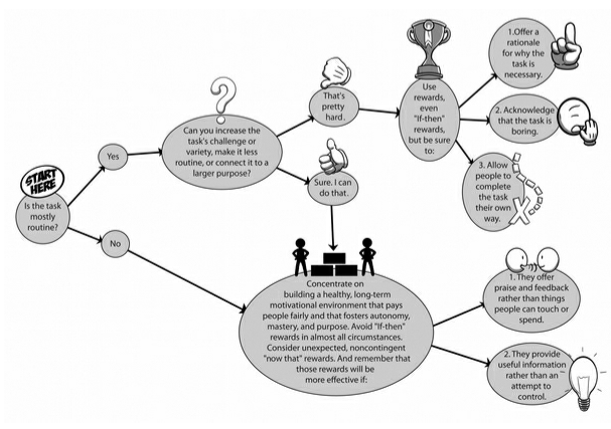 Behavioral scientists like Deci began discovering the Sawyer Effect nearly forty years ago, although they didn’t use that term. Instead, they referred to the counterintuitive consequences of extrinsic incentives as “the hidden costs of rewards.” That, in fact, was the title of the first book on the subject—a 1978 research volume that was edited by psychologists Mark Lepper and David Greene.

One of Lepper and Greene’s early studies (which they carried out with a third colleague, Robert Nisbett) has become a classic in the field and among the most cited articles in the motivation literature. The three researchers watched a classroom of preschoolers for several days and identified the children who chose to spend their “free play” time drawing. Then they fashioned an experiment to test the effect of rewarding an activity these children clearly enjoyed.

Two weeks later, back in the classroom, teachers set out paper and markers during the preschool’s free play period while the researchers secretly observed the students. Children previously in the “unexpected-award” and “no-award” groups drew just as much, and with the same relish, as they had before the experiment. But children in the first group—the ones who’d expected and then received an award—showed much less interest and spent much less time drawing. 2 The Sawyer Effect had taken hold. Even two weeks later, those alluring prizes—so common in classrooms and cubicles—had turned play into work.

To be clear, it wasn’t necessarily the rewards themselves that dampened the children’s interest. Remember: When children didn’t expect a reward, receiving one had little impact on their intrinsic motivation. Only contingent rewards—if you do this, then you’ll get that—had the negative effect. Why? “If-then” rewards require people to forfeit some of their autonomy. Like the gentlemen driving carriages for money instead of fun, they’re no longer fully controlling their lives. And that can spring a hole in the bottom of their motivational bucket, draining an activity of its enjoyment.

Lepper and Greene replicated these results in several subsequent experiments with children. As time went on, other researchers found similar results with adults. Over and over again, they discovered that extrinsic rewards—in particular, contingent, expected, “if-then” rewards—snuffed out the third drive. 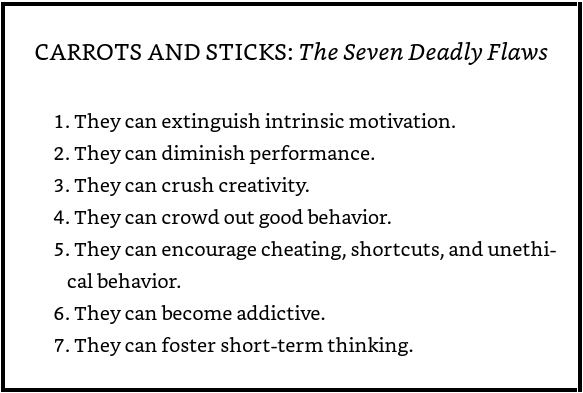 This is a major piece in the puzzle of the Pyrrhic cycle. For all its virtues, the “M0” article in the sidebar has a major flaw because the authors insist on a very silly mechanism for the transmission of dopamine addiction (“ritual = dopamine release”, which is the opposite of the truth). Drive fills in the gap marvelously for this otherwise stellar article, explaining why and how extrinsically motivated people persecute motivated people out of their own institutions. For example, extraverts (i.e. homo sapiens) have driven natural intellectuals out of universities based on the specious claim that they’d be interested in academics if only they were properly incentivized with money and fawning adulation. This is why everyone in the West is now narcissistic–extremely so, in historical terms–and how high-trust societies become low-trust: You simply can’t “incentivize” heroic self-sacrifice.

Thus we see that the cultivation of the human intellect seems to be a magnificent ideal, but only on condition that it does not weaken unselfishness and human dedication to service. Yet this, judging by historical precedent, seems to be exactly what it does do. Perhaps it is not the intellectualism which destroys the spirit of self-sacrifice—the least we can say is that the two, intellectualism and the loss of a sense of duty, appear simultaneously in the life-story of the nation.

Indeed it often appears in individuals, that the head and the heart are natural rivals. The brilliant but cynical intellectual appears at the opposite end of the spectrum from the emotional self-sacrifice of the hero or the martyr. Yet there are times when the perhaps unsophisticated self-dedication of the hero is more essential than the sarcasms of the clever.

(For an explanation of why extrinsically motivated phenotypes never built anything two stories high, see The Dip by Seth Godin.)

Last, we have an insight courtesy of Boneflour: Why do Jews run everything, corrupt women so effortlessly, and inspire such loyalty among the normies?

Because they sell the best drugs.

3 Responses to On motivation (summary of “Drive”)