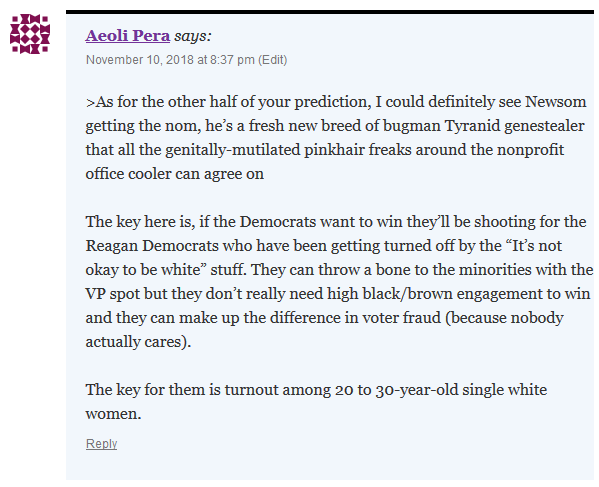 The white pill hiding in my 2020 prediction

This is primarily a response to Bice, who was responding to my 2020 prediction that Trump will lose to a Newsom-Harris ticket, but it’s worth explaining how I think this will play out.

As I mentioned in the comments with old man Obediah, you can’t ever count Trump out because the man is full of surprises. He plays to win, which is a new idea for the GOP. That said, the Democrats have been playing to win a lot longer. They’re in a bad place demographically, long-term, but the long term is not what they care about. It’s a non-issue who their base wants on the ticket, because superdelegates mean they’ll get whoever the leadership wants them to get. The only question is who the Dems think will win. And the answer is whoever can steal the most single white women ages 20-30 from Trump’s base in the rust belt. Minority disengagement doesn’t matter because turnout in the cities can always be arranged during the ballot counting process. (Voter fraud is it’s like the casting couch: everybody knows, but also you’re a conspiracy theorist, but really nobody cares enough, and I’m shocked, shocked etc.)

So I expect a white man with a minority VP “beard” for optics, and all the better if he’s a Bill Clinton knockoff creep with extreme dark triad psychopathy so those single white women can fantasize about 50 shades of “it just happened”. [Emphasis added post-facto] Based on 30 seconds of video, Newsom strikes me as perfect for the role. We also have to keep in mind that a few million more of Gen Z will come of age and the sad reality of this poor, broken generation is beginning to black pill the people who promised you Zyklon.

In order to win reelection Trump has to build The Wall, pure and simple. Without the house there’s no possible way unless he actually assumes the role of commander in chief and orders it done, and I don’t think he’s ready because I don’t think his supporters are ready to back the play of a literal dictator, in the original sense. He’d get impeached for something or other and the game would be over.

On the other hand, consider if he loses. The Democrats would try to go full genocide because that’s what you do when the kulaks start getting ideas about who’s in charge around here. The SJWs and so forth would show civnats where they can put their civility, and Antifa would morph into the stazis they always secretly craved to be. This would finally, finally force the right to harden up, form alliances, and support their radicals. The Republicans in Congress would actually fight because they’re learning their own hides are on the line and no cuck, not even good ol’ boy Lindsay Graham, is gonna survive that. We’re already seeing signs that they get this, and they may finally understand that there are no agreements between gentlemen about sparing fellow officers. That means the Democrats’ political efforts to literally exterminate the right would meet unexpected resisted by a party that finally found its spine, supported by whites who realize they don’t give a fuck.

Then it will be 2024, and Trump would run again. Except this time, he would have the political will of an enraged populace of Europeans under siege. Forget funding The Wall, you’re looking at the sort of stuff you read about in history books. So there’s your white pill. And, if my opinion ever makes it to the ears of someone who matters, please pass along this advice: Pick one of your sons for VP.

Trust me on this, I’m a professional amateur phrenologist woopoasting turtle on the internet.

I did pretty good, except for that last part where I said nice things about Trump. I’m too nice.